After exploring the front panel of the Oberon Synthesizer, now is the time to have a look at the back panel. There lies a feature that can enable some creative sound construction and some interesting combinations between Oberon and other rack devices.

Apart from the classic CV inputs and outputs for modulation and CV note control, you should notice right at the center a great number of audio outputs.

Lets start with a new song. Create an Oberon device and select the “Blip Bass” patch in the “- By Category / Bass” folder of the Oberon Synthesizer patches. Now switch to the back panel with the TAB key. When an instrument is created in Reason, the device’s main output is automatically connected to the device’s channel mix audio input. As you can notice, Oberon’s “Mixed” audio output is connected. This is the stereo output with all the voices mixed into one single stereo stream, which is what we need 99% of the time. 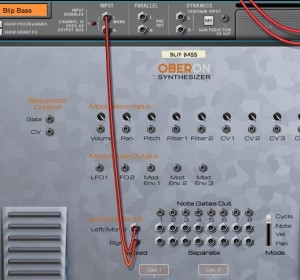 To the right of this mixed stereo output lie 8 stereo audio output pairs numbered from 1 to 8. Lets disconnect the mixed audio output from the canal mix and connect it back to the stereo separate output 1. 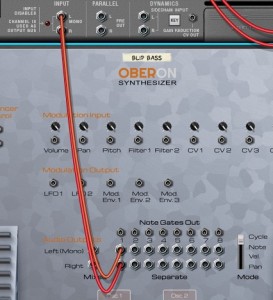 No, of course. Things get more interesting once you use more than one. Lets create a Line Mixer 6:2 device and delete the Channel Mix device that was automatically created with it. We won’t need it as we will use the one created with Oberon. Now connect Oberon’s separate output 1 to the first channel of the mixer and separate output 2 to the second channel. Now connect the mixer output to the Oberon channel mix input: 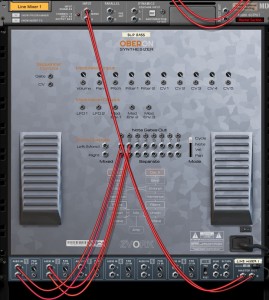 Again, if you play the patch, you shouldn’t hear a difference. But switch back to the front panel and look at the VU meters of the channel mixer’s first two channels. Notice how each time you press a different note it is a different channel that receives audio? In fact, at each key press, even if it is the same note, it alternates from one channel to another.

This behavior of “cycling” through the different connected separate outputs is the default output mode, but this can be changed. To the right of all the separate stereo output pairs is a vertical fader switch with four different states. By default, it is on “Cycle” which exactly what we are experiencing. Switch that to “Note” and play. Be generous and use the entire keyboard span.

As you can imagine (and you can try it out for yourself), using output mode “Pan” distributes the voices to the connected separate outputs based on the stereo pan value of the notes.

Lets switch back to “Cycle” mode and see what we can do with all this.

With all these separate outputs we can apply effects to the Oberon Synthesizer differently for each note. Lets connect a fourth separate output to the channel mixer, for instance separate output 8. As you should understand by now, the exact separate output number doesn’t really matter as Oberon only considers the connected outputs. In between each separate Oberon audio outputs and the mixer channels, we will insert an effect device, different for each output.

We used the Softube Amp and Bass Amp device patches for that and created four instances with these patches: 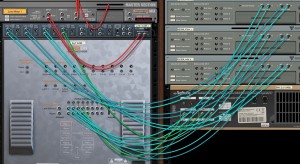 To test if this is working, press a single key multiple times. You should here the Blip Bass patch being played in cycle through all four effects for something that sounds like this on a C2:

To put this into context, we’ve created a Matrix sequence that we have connected to Oberon.

Here is the raw loop without effects followed by the same loop with the cycling effects:

And here’s that same loop with effects but this time with the separate output mode set on “Vel.”:

There is another feature we can use to spice up our loop. Oberon has separate audio outputs but it can also output a CV gate signal each time a note is sent to each connected separate output. This of course reacts to the current separate output mode.

Then, connect the separate output 2 gate signal (the socket is just above the audio stereo pair) to the ECF-42 “Env. Gate” input socket. The filter should trigger every four notes played.

Here we’ve configured our ECF-42 with very dynamic settings and a slow attack:

And this what our loop sounds like in “Cycle” mode, followed by the same loop in “Vel.” mode: